We are installers of Canal Digitaal, the leading platform for digital television in the Netherlands. Watch Canal Digitaal Holland in Estepona, Marbella, Manilva, Benahavís, Casares and Sotogrande. 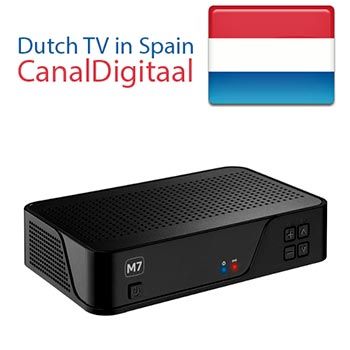 Enjoy the best Dutch satellite TV in Estepona, Marbella, Manilva, Benahavís, Casares and Guadiaro. You can now watch all your favorite Dutch channels such as ED 1 NED 2 NED 3, RTL 4, RTL 5, RTL 7, SBS 6, NET 5, Veronica in Spain thanks to the installation of a satellite aerial and a receiver.

In AudioService we will install and commission the satellite TV system. We have completed hundreds of Canal Digitaal, Dutch satellite TV installations in the province of Malaga and Cadiz, especially in the towns of Estepona, Marbella, Manilva, Casares and Guadiaro.

The installation includes the receiver. Since 2012 there is no need to have an address to get the cards. All packages are available.